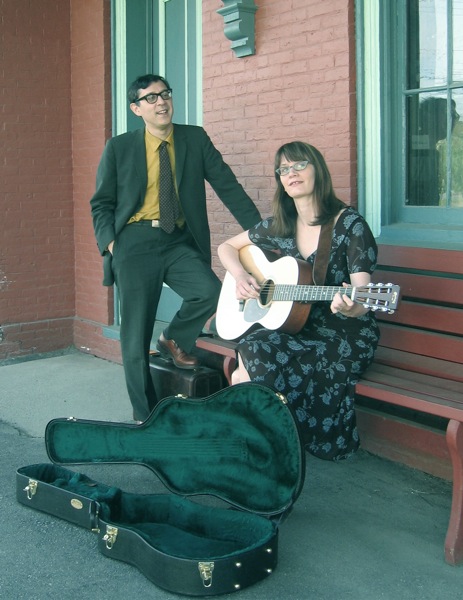 Hungrytown is the band name of celebrated musical duo Rebecca Hall and Ken Anderson. Their deceptively simple compositions are rooted firmly in folk tradition; “in fact, Hungrytown’s music offers such an aura of authenticity–in titles and in tunes–it could be easily mistaken for original trad transcripts,” declares Lee Zimmerman of Performing Songwriter, and Rachel Nones of the Feminist Review raves “Hungrytown is American folk music at its zenith.” Early reviews of the CD have landed the group daily airplay on XM Radio’s “The Village,” and Hungrytown songs are beginning to appear on playlists across the country, including Boston’s WUMB, New York’s WFUV and Philadelphia’s WXPN.

In Hungrytown, things are not always what they seem. In “Rose or the Briar,” a Carter-Family-style parlor ballad, a young man is drawn to a beautiful girl, but finds her lovely appearance offset by her prickly disposition. “One Morning in May,” conjuring ’60s-era folk rock, begins with a soldier marching confidently off to what he thinks will be an quick and easy victory, only to find himself mired in an endless and pointless war. The metaphorical heart of the album, “Hungrytown Road,” is a bluegrass waltz depicting a poor girl’s longing to discover her potential beyond the boundaries of her limited and difficult life. Indeed, each character in Hungrytown is a resident–the variety of musical styles reflect each of their personalities, trials and perils. Hungrytown is a place where many of us have been, and where many of us still live.

And now Hungrytown has a new CD out, “Any Forgotten Thing.”
Read all about it in this New York Music Daily review: http://newyorkmusicdaily.wordpress.com/2011/12/06/hungrytown/.

Please come join us for a wonderful evening of music and friendship. Ken and Rebecca are good friends (this is our third time hosting them) and you will enjoy their music and their warmth as people.

For more information and an invitation, please contact Lee at 575-522-5197 or by e-mail at lasalturashouseconcerts (at) gmail.com.

This site uses Akismet to reduce spam. Learn how your comment data is processed.

Due to the COVID-19 pandemic, we will not be hosting any in person shows in 2021. We will assess the situation as  the year progresses.

If we get online shows booked, they will be posted here.

We are posting some online shows on our Windy City Music Calendar.